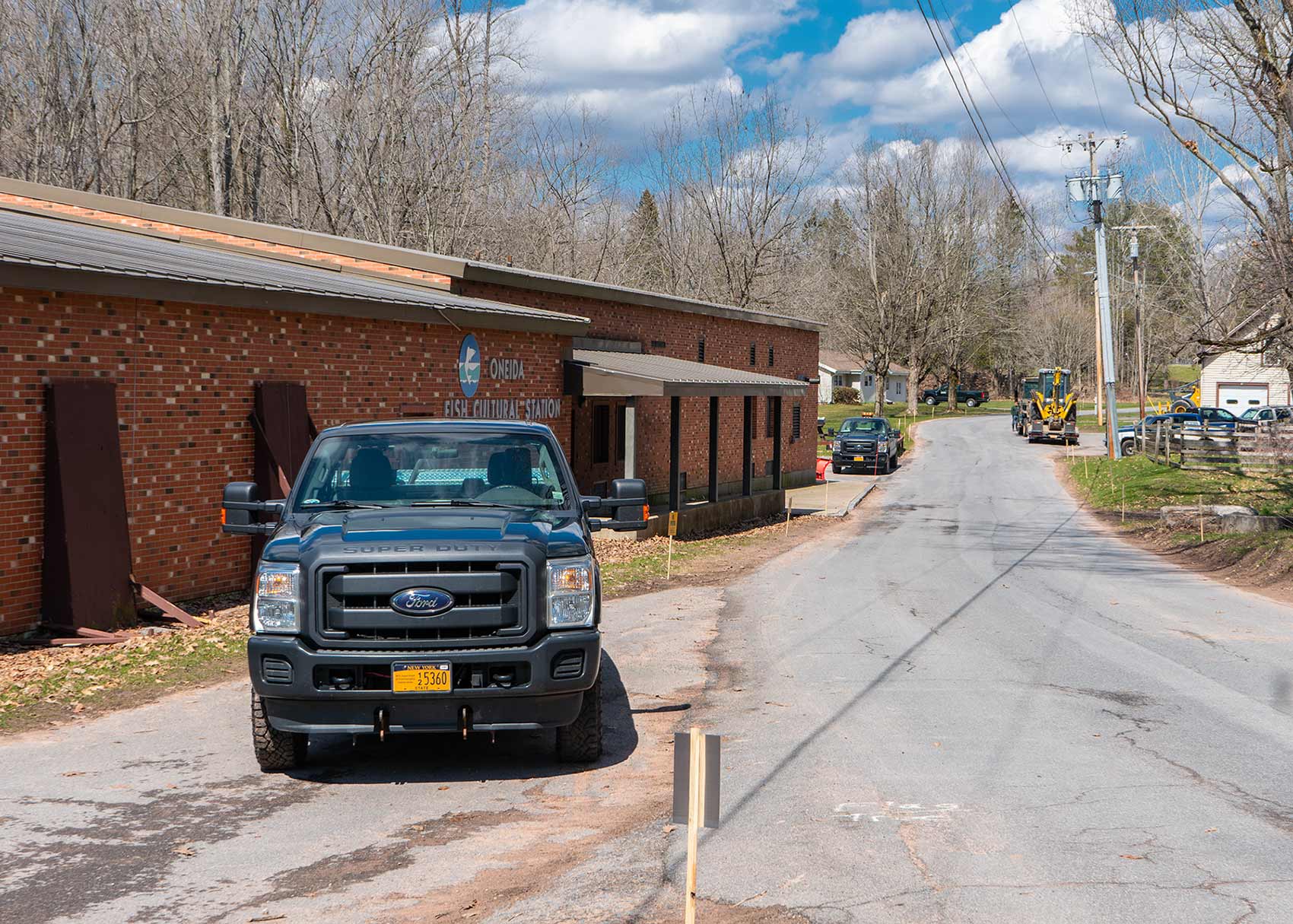 Barricades Up At Oneida Fish Hatchery

The picture of the fish hatchery was taken around noon yesterday and later in the day workers placed approximately thirty concrete barricades at the front entrance and rear parking area of the hatchery.  You can see in the picture the construction equipment and as we rolled by it looked like workers were waiting for the delivery of the barricades, which happened yesterday afternoon.  Parking is also blocked along Hatchery Road and the lots next to the hatchery’s maintenance facility, and the roadside parking area north of the county trail.  The parking lot by the trail also remains gated as it normally would during the spawning season.

Signs posted yesterday on entrances to the facility indicated that the hatchery was closed to the public due to a COVID outbreak.  In a statement released yesterday, the DEC announced that “to protect health, safety, and the spawning population, DEC is temporarily closing access to the hatchery and spawning sites.”  The DEC also announced that the parking restrictions will remain in place through the remainder of the spawning season.

We are receiving all sorts of information regarding this controversy and will report more over the next few days–some of it is fairly wild and we want to confirm anything before posting it.  One thing we should all take from this incident and controversy is the importance of the Oneida Lake Association in protecting our fishery.  On that note, you can join the OLA at this link.  Further, the OLA’s Annual Meeting will be in-person this year on April 27 at 7 pm at Millard Hawk Elementary School in Central Square.  The meeting will also be available online and features a variety of informative speakers.

It is not all doom and gloom here on Oneida Lake as many positive events are on the horizon.  The inaugural Jason Norfolk Memorial Walleye Tournament is coming up on May 14, you can register by following this link.  Also, the annual Chittenango Lions Club Walleye Derby is once again set for the now sort of opening weekend, the actual tournament dates are May 7 and 8 and you can enter here.  As most of you know, walleye season now officially begins on May 1.
For those heading out on the water, a reminder that from November 1 to May 1, all persons aboard a pleasure vessel less than twenty-one feet regardless of age must wear a Personal Floatation Device (PFD) while underway.  Finally, the ice dislodged many of the pin buoys marking hazard spots on the lake.  Some are reported as far as 300-500 meters from their normal location so take extra caution along the way.

Published in Alerts and News